Now is the time to act not only because of the urgency of the climate crisis, but because 2020 is a critical year. The Paris Agreement includes a “ratchet” mechanism to encourage countries to increase their climate commitments over time. New pledges are submitted every five years, with the next round due at the 26th Conference of the Parties in late 2020 (COP26). COP26 offers an international platform for national governments to showcase their climate leadership and stimulate greater global ambition.

This chapter presents key actions that national governments can take to foster thriving, resilient cities with net-zero emissions. The first and overarching recommendation is for national governments to prepare a national strategy to deliver shared prosperity while reaching net-zero emissions – and to put cities at the heart of it. Once this clear vision is in place, it can guide decision-making across different ministries, including how national governments (1) reform national policies, (2) fund and finance sustainable urban infrastructure, (3) empower local governments, and (4) engage with the multilateral system. All these national actions will be most successful if underpinned by a commitment to a just transition, as illustrated in Figure 16.

Within those high-level priorities, this chapter offers a toolbox of policy options. While not all will be relevant to every country, the toolbox as a whole has relevance to countries at all levels of development. Income levels should not constrain ambition: many low-income countries are undertaking ambitious and complex actions that high-income countries could emulate. The recommendations are presented in three sequential categories:

These categories reflect the diverse starting points from which national governments pursue climate action in cities. This is not solely based on levels of income. For instance, eliminating fossil fuel subsidies and introducing a carbon price (Priority 3.1 and Priority 3.2) are fundamental for systematically steering investment towards sustainable urban infrastructure – yet high-income countries such as Australia and Israel do not have a carbon price, while middle-income countries such as Colombia and South Africa do. These categories also recognise the importance of sequencing climate mitigation and adaptation policies appropriately. For instance, a country can use its position on the board of international financing institutions to encourage them to end all fossil fuel financing (Priority 5.2) as a step towards ensuring that all international public finance flows align with the Paris Agreement and the 2030 Agenda for Sustainable Development (Priority 5.3). The breadth of these recommendations reflects the interconnectedness and centrality of cities to wider national development, and the myriad ways in which they are influenced by national policies.

These priorities draw on three years of research by the Coalition for Urban Transitions, supplemented by a consultation process involving over 50 institutions, including research institutes, networks of national and city governments, investors, infrastructure providers, strategic advisory companies, non-government organisations and grassroots organisations. All have been tested with representatives of national and city governments to confirm their relevance and viability. 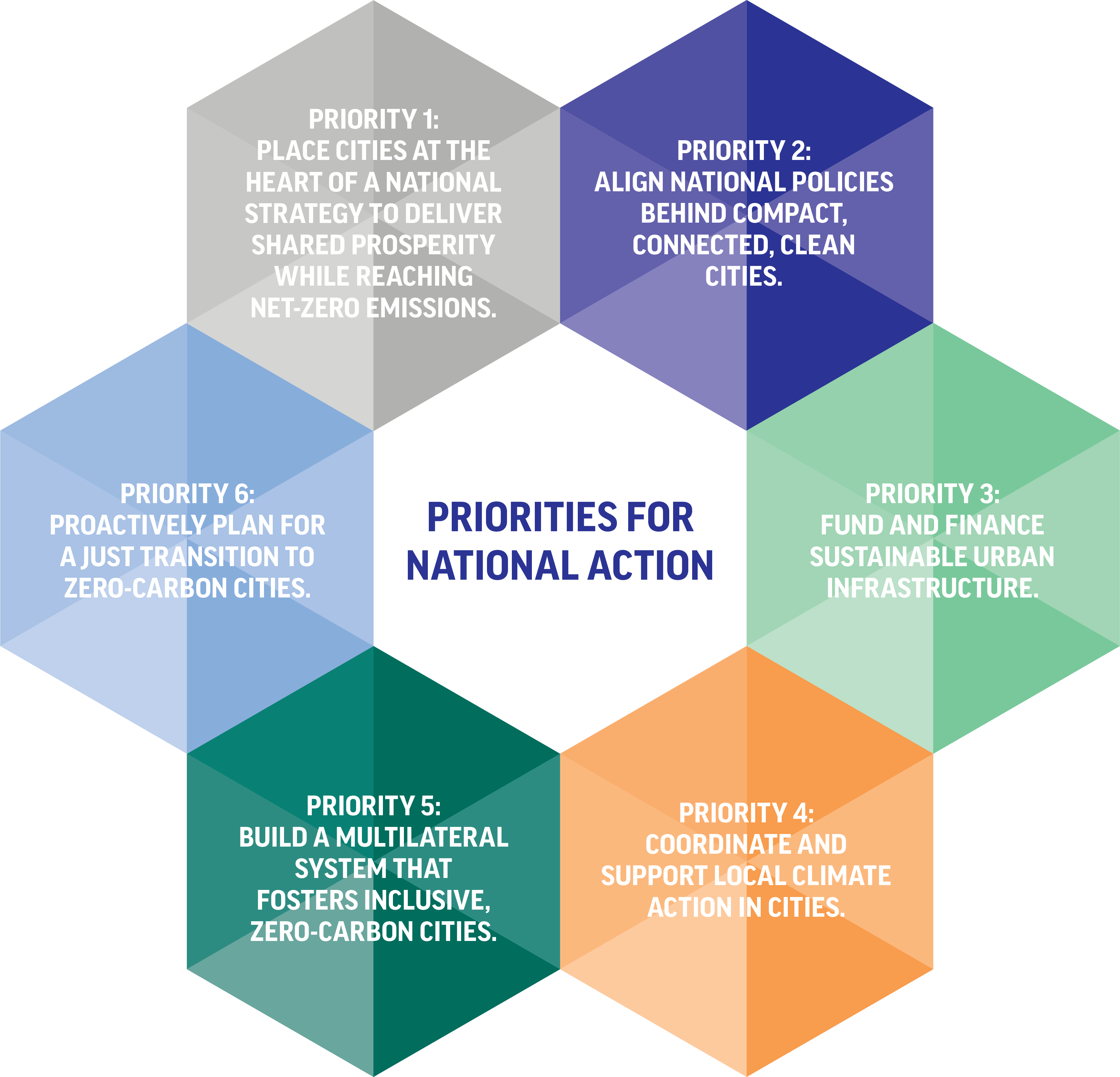